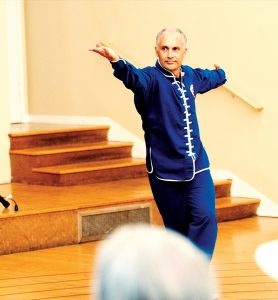 Hasan Sume grew up in Marin but, went to high school in Oregon. Sume started taking Karate because the folks around there didn’t take too kindly to a California boy. When Sume escaped to college he started studying Aikido. Hasan became interested in Taoism and the Taoist exercises he was learning led him to Kung Fu. Hasan started studying Northern Shaolin and found that it combined the hard and soft of the previous styles he had learned and so much more! That was 25 years ago. About 12 years ago, Sume was at a low point in his practice having just tried to open a school, but then closing it. “At that time the universe sent me Sifu Scott Jensen, his car literally broke down in front of my school. The rest is history. I am very honored and proud to be a black sash recipient at 10,000 Victories Kung Fu School.”