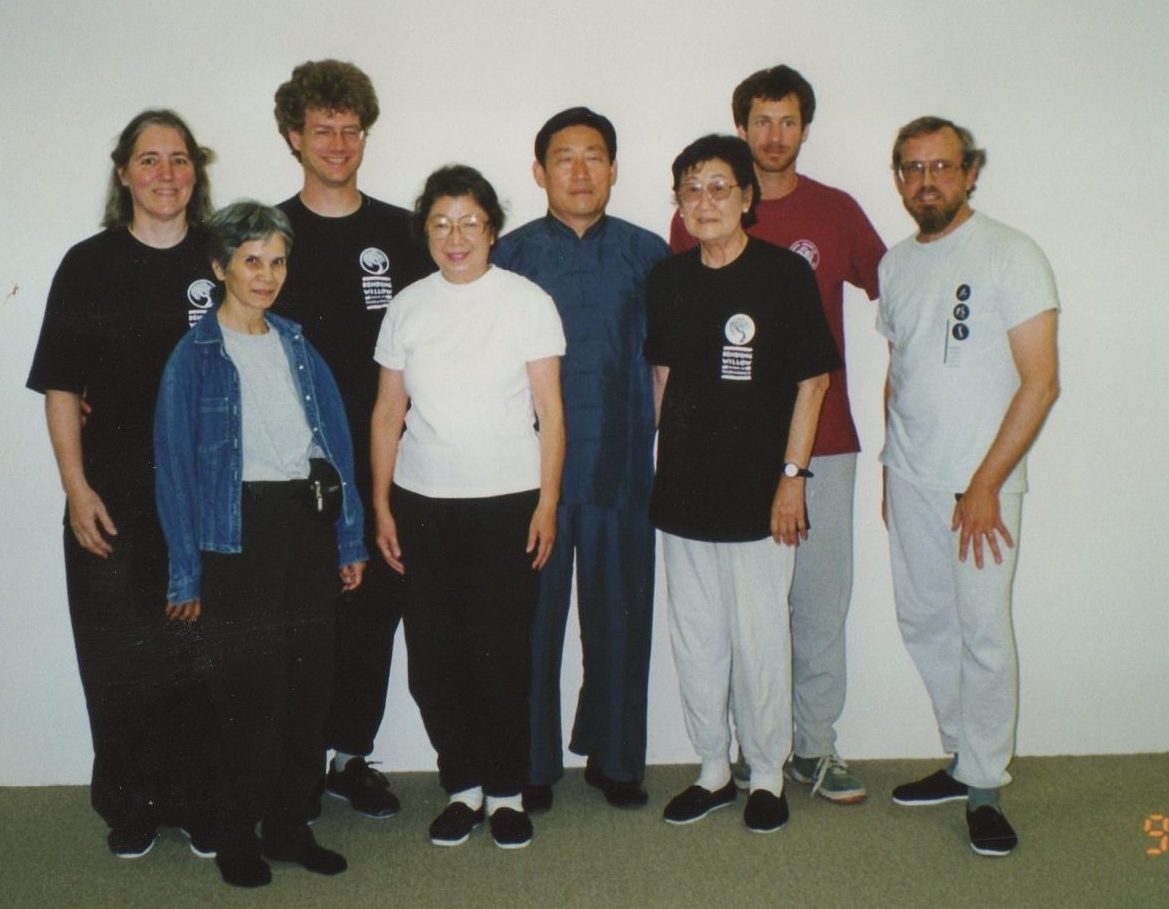 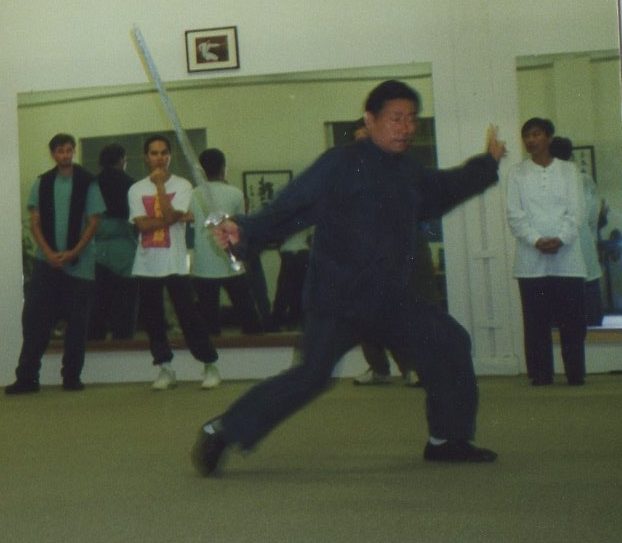 Chan Su Chin, or “Silk Reeling Exercises”
The first time he taught Chan Su Chin, or “Silk Reeling Exercises”, in detail. These Qigong like exercises, are the foundation body mechanic building exercises of Chen Style Tai Chi Chuan. They help you to develop the proper sequencing of body movement, correct structure, and practice linking your breath to your movements. The Chan Su Chin are designed to develop your striking and throwing power, or fajing. They also condition your tendons and joints so you will not be injured when you use full power.

Chen Style Tai Chi Chuan Spear and Sword
We were also grateful for his demonstrations of Chen Style Spear and Sword. He could see the many swords and spears on display in our school. He also knew that I had studied sword and spear with reputable teachers. Chen Xiao Wang really opened up, and talked about the unique characteristics of Chen Sword and Spear.
In sword one thing he showed were some of the entries he liked and a series of movements performed with both hands holding the sword. Such double handed use of the Jian, or sword, is rarely seen in traditional Chinese sword forms, regardless of style. May styles of Tai Chi Sword are more of a Qigong exercise. Many Tai Chi Sword forms are quite gentle and far removed from combat training. Chen Xiao Wang’s Chen Style Tai Chi Chuan Sword was fast lively and powerful. Chen Style Tia Chi Sword still has some sharp edges. Just as you would expect from a family martial arts tradition based around summer service as mercenary infantry units.

In his Chen Style Tai Chi Chuan Spear Form, Chen Xiao Wang showed the Lan (Rising Block), and Na (Press Down), movements were combined. Lan is almost eliminated to develop a faster Na. Since the detailed specifics of how each style uses Lan, Na, and Zha (Thrust) are one of the key things that differentiate styles of spear, it was a enjoyable discussion for me. 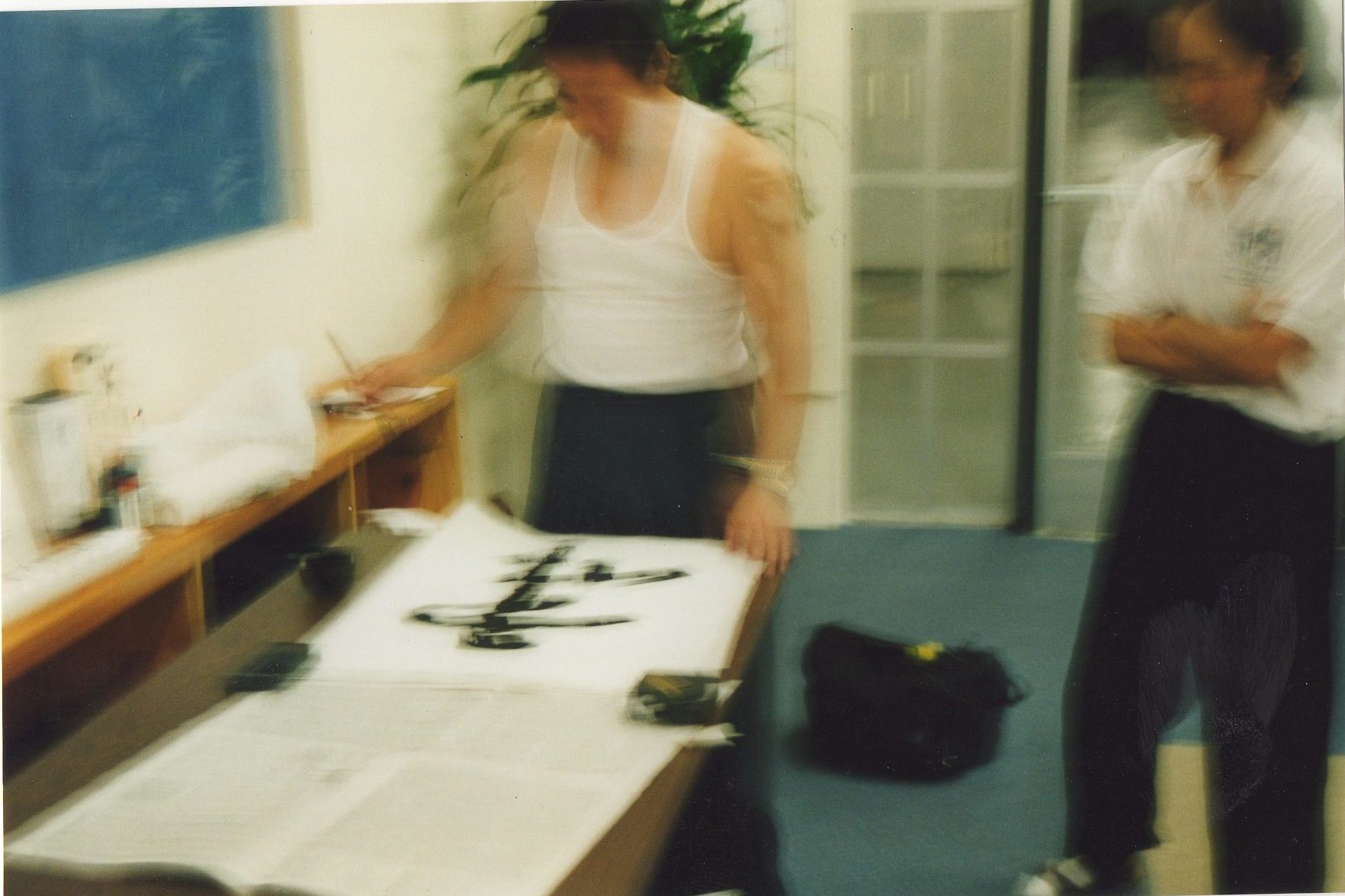 Chinese Calligraphy by Chen Xiao Wang
I admire Chinese Calligraphy and Language. Looking at beautifully written characters and understanding how the meaning of each word is built out of smaller symbols combined together. Then thinking about the famous idioms of Chinese culture and how the communicate meaning helps you to deepen your understanding of Chinese thought, philosophy, and marital arts. Chen Xiao Wang is well regarded for his  calligraphy. I was honored that he wrote a beautiful couplet for me. A couplet is two characters designed to be displayed together and together communicate a deeper meaning. Chen Xiao Wang wrote “ Softness” and “Control”. Learning to balance these qualities is the heart of Tai Chi. I am grateful for these words and see them every day.