Building Heroes for Thousands of Years – One Workout at a Time!

The Training Map of Northern Shaolin

Northern Shaolin Kung Fu is a structured system of movement that improves your posture, balance and coordination.  Posture training helps prevent spine and joint problems from arising.  Core training gives you the strength and flexibility to not only be skilled from a martial perspective, but also healthy in everyday life.  This practice gives a lasting physique even through old age.

Physique of a Shaolin Martial Artist

The art of Northern Shaolin has evolved over centuries with a core set of 10 training routines, also referred to as “forms”, that cover all types of combat techniques suited to various types of bodies.  The routines of Northern Shaolin are famous for incredible athleticism, dynamic energy, and beautiful choreography.

Fighting skill is the most quintessential goal of martial arts.  We train six stages: Dodging and defensive skills, low kicks, hand attacks, high kicks, throws and sweeps, joint locks and ground combat.  10,000 Victories students learn the applications of moves from the Northern Shaolin forms, and have the opportunity to spar regularly.

In ancient history weapons mastery was far more important than unarmed combat skills.  Northern Shaolin retains these classic weapons forms including two person forms.  While you hopefully do not need to wield a spear or sword frequently in today’s world, weapon forms are a fantastic way to build strength and coordination.

The Lore of Northern Shaolin includes a rich history, and deep philosophy.  Understanding these fields compliments your martial training and expands your ability to help others.

12 different pushups, done with specific body alignments that correspond to striking and grappling movements.  These are combined with numerous front and back of body core exercises which will give you the strength you need for Northern Shaolin.  Breathing is linked to these exercises so that you will have an ingrained sense of breath control even in combat.  The long forms of Northern Shaolin will also provide ample stamina by training your endurance and cardio.

Northern Shaolin experts of known for their flexibility, high kicks, soaring leaps, and low stances.  This flexibility enhances your ability to escape locks, increases your speed, and opens up many moves that simply wouldn’t have been possible without it.

Keeping your balance both mentally and physically keeps you light on your feet, grounded, and ready.  Practicing complex movements while one one leg is an integral part of Northern Shaolin.  This training gives you the ability to easily move your feet where you need them, to find and exploit your opponent’s center of balance, and to have power while transitioning from one movement to another.

Every strike is powered by the strength of the legs and torso, not just by the muscles of the arm or leg.  By training to use the connection from your striking limb through your body and into the ground, you can maximise both the effective mass and the acceleration of your strikes.  Since force is equal to mass times acceleration, you can greatly increase your striking power through technique.

Training the long and difficult forms of Northern Shaolin requires discipline and focus.  The forms start less rigorously, and build in physical intensity, and complexity such that a later form will require vastly more mental fortitude than a beginning one.  Building your willpower by enduring tough workouts and challenging yourself to excel will help you to succeed in other parts of life, as well as martial arts.

Begins the training of your legs building intense leg strength and flexibility to power the most basic and most important techniques. (Ton-toy) 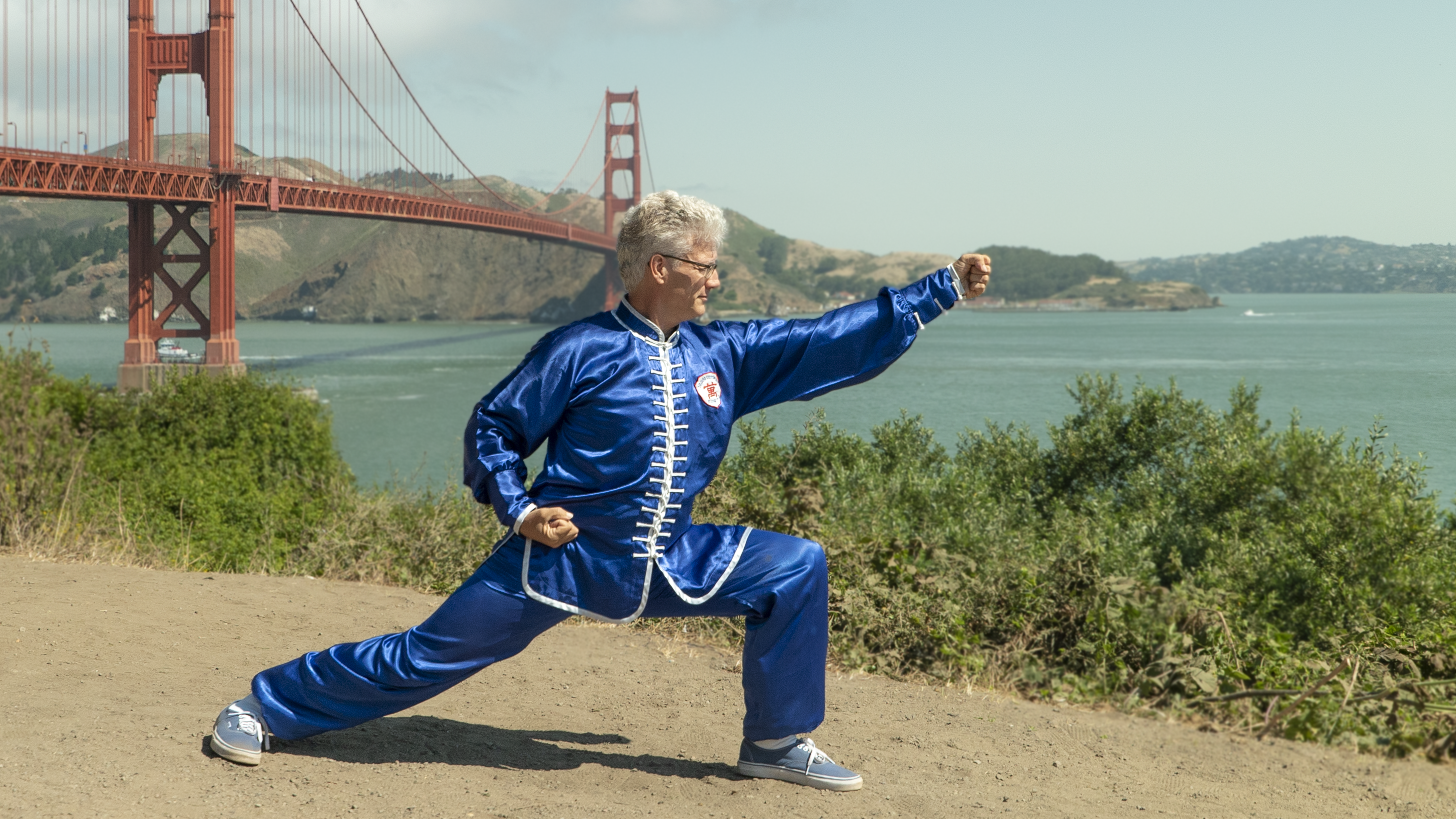 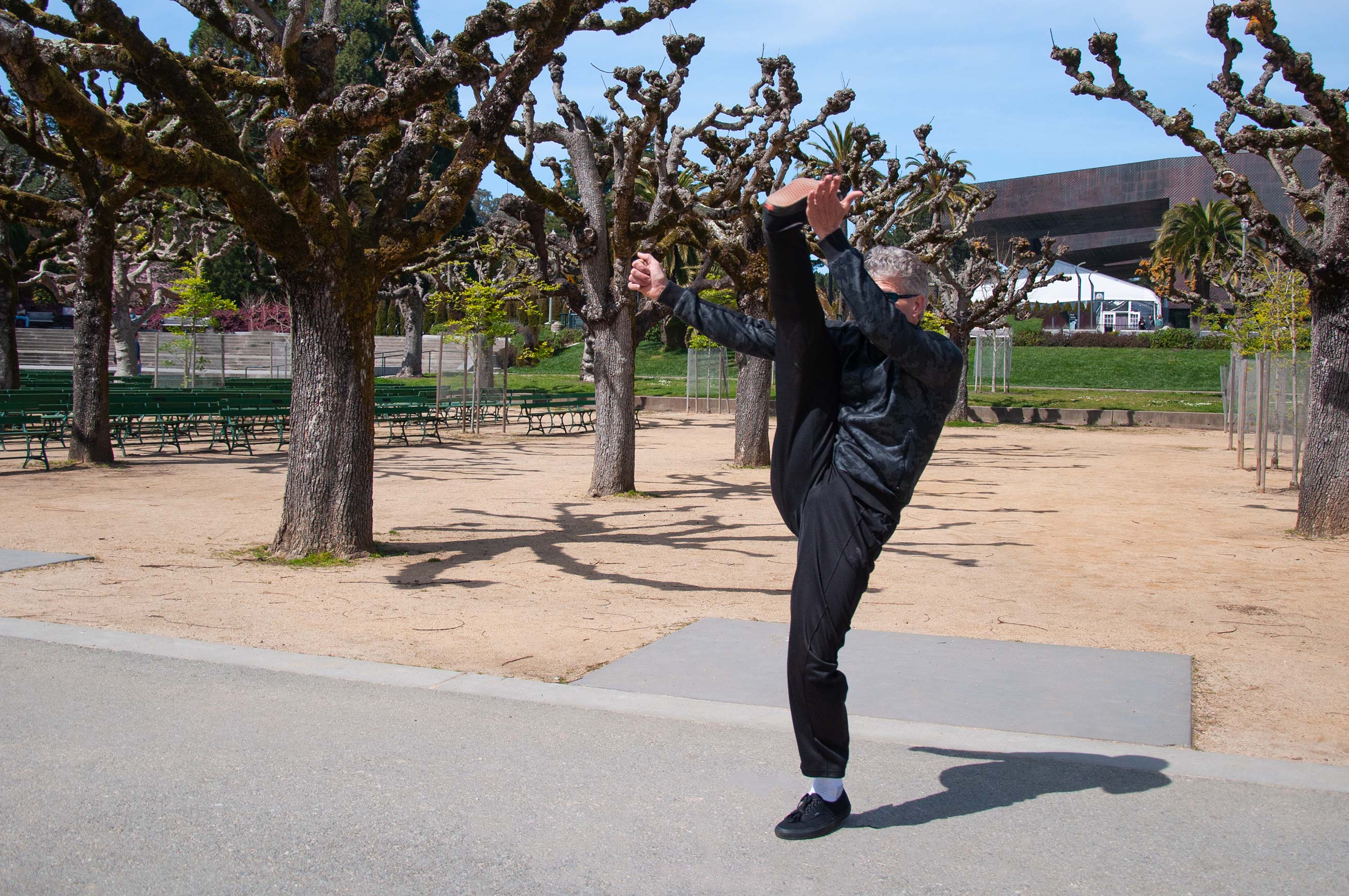 Learn to dissolve the opponent’s strength by leading them into emptiness with your stepping and stances.

Eleven flying kicks and over 100 strikes and throws make this an intense endurance form full of unique moves and skills.

This form focuses on punches and kicks to the opponent’s chest.

A kicking form that focuses on specialized high kicks.

This form focuses on gracefully connecting different moves in new ways, and using fluid movement to power your strikes.

Learn to overcome your opponents stances with sweeps, pushes, and throws and knock them down with flying kicks.

Advanced footwork, hand movements, and acrobatics are core to this intense form.

Contains many specialized and deadly techniques unique to this expert level routine.

This form is the key bridge between Northern Shaolin and Xing Yi.  It increases the spiraling connections within your body improving power and speed.  (lee-oh huh)

A short but expert form committed to power punching.  This form lays the groundwork for the other forms in the Lohan system.

The “leopard Form”, learn to use the leopard fist and stance with returning strikes and attacks from unexpected angles.

The most aggressive form of an already incredibly aggressive system, full of strikes, kicks, sweeps, and leaps.

An expertly choreographed battle “fought” with your friend as your opponent.  This form includes everything, striking locking, throwing, sweeps, flying kicks, ground fighting, and acrobatics!

Are you standing in the moment of truth?  When you need to defend your family, friends or yourself you find out the measure of yourself as a warrior.  Does your art allow you to be the dominant fighter and win?  That is the moment of truth.  To prepare you we practice nightly sparring and self defense drills.

Learn to kick the opponent’s legs both offensively and defensively.  A well placed kick can end a fight before a punch would even be in range.

Practice punching, blocking, and parrying in a variety of practical applications.

Learn to practically apply the deadly high kicks that Northern Shaolin is known for!

A multitude of skills around ground fighting, with an emphasis on how to quickly return to a standing fighting stance.

The most advanced techniques that require the greatest care to practice in a sparring setting. 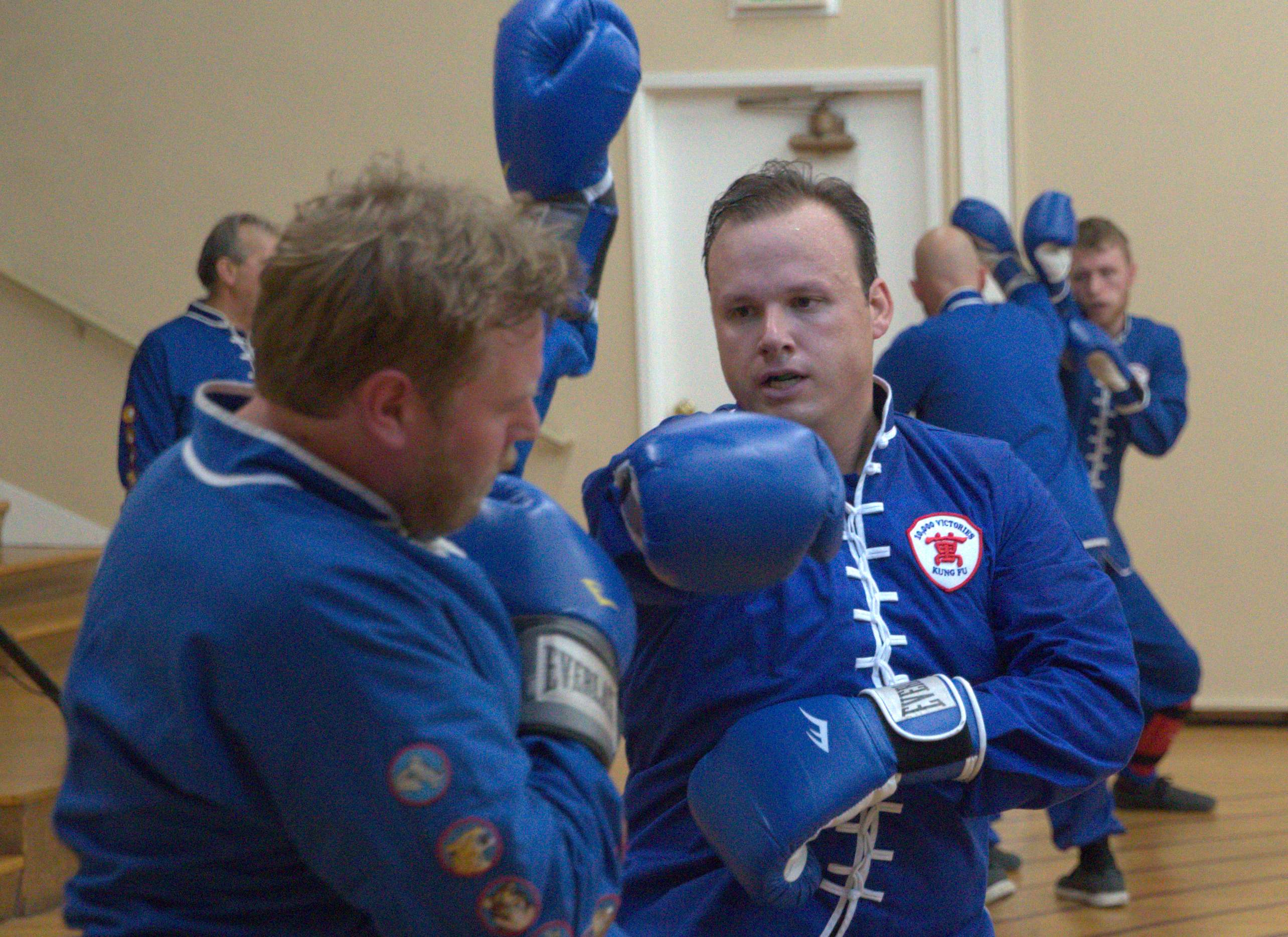 88 long staff techniques.  The expert level staff form taught by Grandmaster Wong Jackman.  Massively improve your upper body strength and grappling power.  The staff is the primary weapon of Shaolin and one of only thirteen items permitted to be owned by monks.

The Spear is the “king of weapons”.  The spear’s combination of extreme speed, reach, and power make it difficult to defend against.  Master the rising block and drill through your opponent’s defenses with powerful thrusts that improve your punching power.  A specialty of Grandmaster Gu Yu Jeong.

“Saber Shows Your Energy (Qi)”. The Saber attacks with the ferocity of a tiger and the nimble legs of Northern Shaolin. Specialty of “Big Saber Li” the top saber fighter of the 20th century.

A pure and elegant sword style directly from Wudang Mountain that develops your Shen (spiritual energy) as well as incredible athleticism and fencing skills.

This giant halberd features a huge blade, thick handle, and large spike. Created by General Kwan “the God of War” who teaches Wu De or martial virtue. Takes your power and strength to another level.

Expert level dual wield form, from the legendary Wudang mountains.  Test your focus, balance, coordination, and flexibility as you build your body method and ambidexterity.

This frightening expert level weapon is dual wielded but can be hooked together and swung as a long weapon. Watch Out!

From Northern Shaolin Lohan (Buddha Palm) style.  Strengthen the left side of your body by using the spear on the other side.  This form is longer and more complex than Rising Block Spear.

One person starts with no daggers while the other has both. First disarm one dagger, then the other, retrieve both with a diving roll and then get disarmed yourself before and acrobatic throwing finish.

From Northern Shaolin Lohan (Buddha Palm) style.  Strengthen the left side of your body by using the spear on the other side.  This form is longer and more complex than Rising Block Spear.

The easiest of the weapons sparring forms the staff versus staff builds courage and power as you clack staffs and the smell of burnt rattan fills the air.

Now the spear is on the defensive – or is it?  The spearman must be skilled to perform the necessary defenses in this form.

This dual of Kings is both dangerous and exiting to learn. Shines a spotlight on the techniques found in all spear forms.

The swordsman must be nimble and quick to survive! The spearman cannot let the saber person get in close! 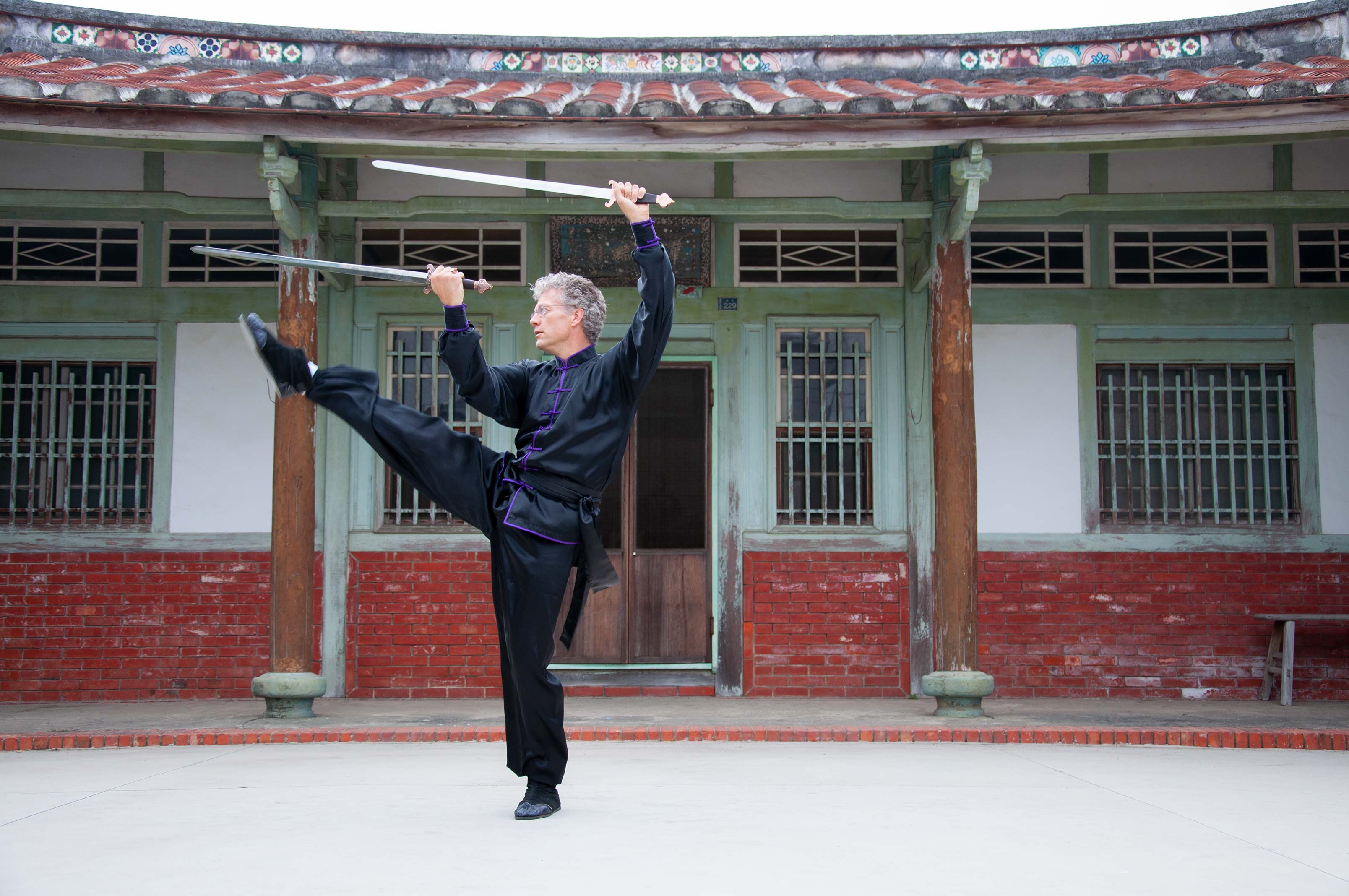 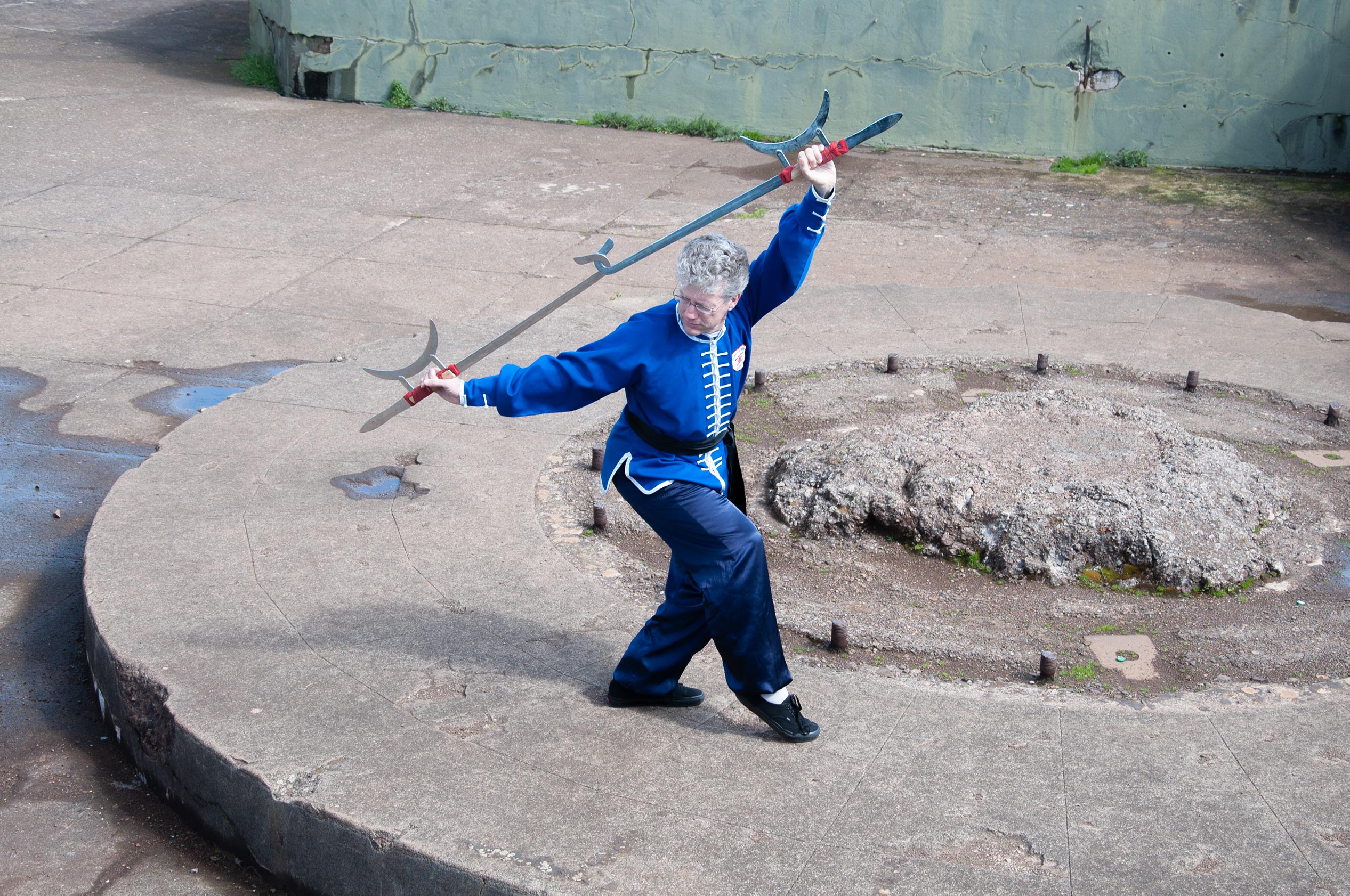 At 10,000 victories we train to be prepared for underhanded tactics, but we also discuss when it is appropriate to use what techniques.  Knowing to avoid a fight is an essential skill of a martial artist.

History of the Shaolin Temple and Origin of 10,000 Victories

Shaolin Temple is founded for the monk Tamo by Emperor Xiaowen of the Northern Wei Dynasty in order to translate Buddhist texts from sanskrit into Chinese.

Bodhidharma, the 28th patriarch of buddhism directly from Buddha, arrives from india and meditates for nine years straight facing a wall.  Then he teaches the monks the Chan, or Zen, method of medititation and the Yijijing (Qigong Method) proprelling the Shaolin Temple into a new era.

Emperor Li Shimin – founder of the Tang Dynasty grants the Shaolin Temple land, orchards, income.  By this time the Shaolin Temple is a key temple in Buddhism producing many wise and famous monks, while maintaining strong martial traditions for centuries.

Shaolin Temple is burnt to the ground by rebels for remaining loyal to the emperor.  The Shaolin Temple’s fighting force was destroyed, and few monks survived.

Chiang Kai Shek’s warlord Shi Yousan burns the temple and its library after killing and dispersing the monks.

Grandmaster Gu Yu Jeong shows the Northern Shaolin style he inherited from the descendants of the survivors from the 1641 overrun of the temple.  Becoming immediately famous as a dominant fighter, the greatest iron palm master of all time, and a true hero.  He teaches the pure Shaolin Style publically for the first time at the Central Guoshu Institute.

Hardship continues at the Shaolin Temple, but the Northern style grows in Hong Kong, Taiwan, and Southeast Asia.

As Communism rises in power and the cultural revolution begins Northern Shaolin reaches the USA as Grandmaster Wong Jackman arrives in San Francisco.

Grandmaster Wong Jackman answers Bruce Lee’s open challenge in a historic and controversial private match, the outcome of which is hotly debated.  After the match Bruce Lee abruptly leaves town and begins to incorporate kicking into his fighting style.  Wong Jackman continues teaching and working in San Francisco, including the day after the match.

The 5 remaining monks are arrested by the Communist government, beaten, and humiliated.  The temple was stripped empty and abandoned.

A new Abbot, Shi Yongxin, is instated and marks the beginning of the current era of the Shaolin Temple.  Monks currently train and live at the Shaolin Temple, and it serves as a popular tourist attraction and national icon.