Grandmaster Liang Ke Quan was an exceptional Xing Yi Quan and Ba Gua Zhang master. These photos of him in his eighties show his exceptional vigor. Liang Ke Quan is remembered fondly by all who knew him. For those of us fortunate to study with him he made a deep impression. 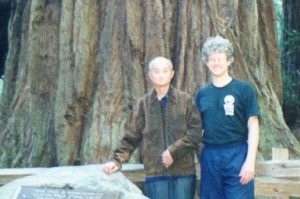 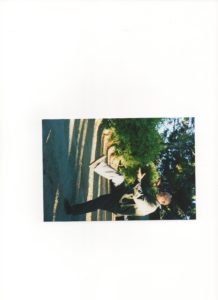 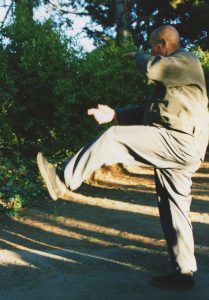 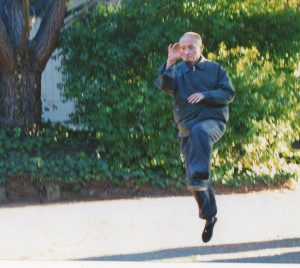 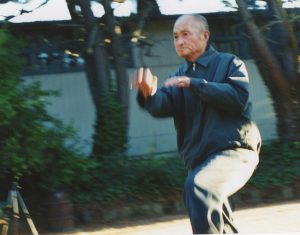 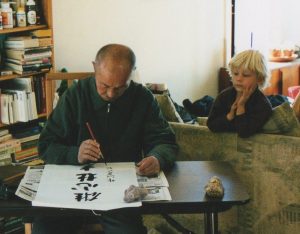 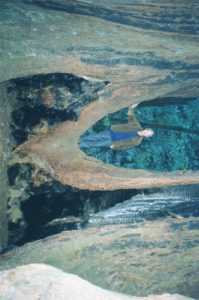 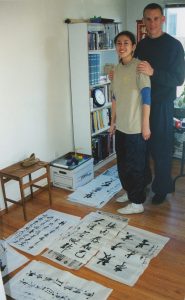 Liang Ke Quan was an officer in Chiang Kai Shek’s Nationalist army. When the Nationalist army was weakened by defending China from the Japanese, Mao’s Communist army started to win. Liang Ke Quan’s unit was surrounded and captured.  The communists put them in a prison camp, and began starving them, and demanding confessions to be freed. Every day, Liang wrote a letter detailing the crimes he had personally seen Mao, and Mao’s army commit. Not exactly the confession the party officials were looking for!

The camp commander came to Liang, and said he had been intercepting the letters every day, and not turning them in to the party officials. The commander stated that if the party officials read them they would just kill Liang. Liang said he could see in the commanders eyes that he knew Liang was telling the truth. Since they were all starving to death any way, why not tell the truth to end? He then asked the commander, if he had any human feeling left, to at least feed them.  After a few days, the men were taken to the rice fields to work. The fields were flooded with very rich river water that was full of shrimp and eels. The men ate these raw in the fields and survived.  (Liang never passed up shrimp or prawns on the dinner table!!)

Later, Liang was sent to a regular prison. He spent 15 years as a prisoner and became the manager of the prison store. After 15 years he was still an unrepentant Commie hater (God Bless him). The Communists came, and said he could leave the prison, but, there was no housing assignment, and no job assignment. Basically, he could leave, but he would be a homeless beggar. Or he could stay at the prison, and continue to manage the store, and he would be able to come, and go, if he choose. He stayed at the prison for another 15 years before finally leaving.

While in prison, he was able to practice his Xing Yi and Ba Gua. When he was allowed to leave, he traveled and met many other Xing Yi Masters and Ba Gua Zhang masters. Liang Ke Quan and visited Cheng village where the Cheng Family continues Cheng Style Ba Gua Zhang. Liang Ke Quan combined a never give up pit bull fighters instincts, with a friendly charisma. Many people discuss meeting other masters, and exchanging knowledge, but rarely do. (Especially in China!). Liang had the personality to make friends with many people, and the martial prowess to impress them. He really did study, and discuss, Xing Yi Quan with many other masters. As a result, he had a vast knowledge of Xing Yi Quan. He taught many variations of the 5 Elements, and Awesome Animals.

His most famous was tree shaking. Liang Ke Quan could hit trees with his shoulder, and shake them so you could feel the impact go through the tree, into the roots, and see the leaves dance. The trees he liked to hit were the biggest he could find. Often so large it took two people to reach around them!  When he visited us here, without explanation we took him to see the giant Redwoods in Marin County CA at Muir Woods. He didn’t know where we going. As soon as he saw the redwoods he started laughing and waving his hands. It was great! He knew we had him and he couldn’t shake these trees. He loved to see them and walked deep into the forest admiring the awesome trees. When he left I gave him Redwood seeds to take home to Beijing.  Perhaps they still grow there.

Liang Ke Quan also loved to write wonderful brush Calligraphy and gave gifts to many of his students that reflected his impressions of them. One student (Phillip Pease) who really threw himself into Xing Yi Dragon received a beautiful calligraphy for Leaping Dragon. Others received Shen (spirit), poems, and other things that struck his fancy. He wrote ”the Giant Roc Flies 10,000 Miles with a single flap of its wings” for one hard working student (Stas Volik). Another who really wasn’t getting it received the “The lowly brush sparrow must work very hard to be like the Giant Roc”,  We all laughed. It was funny, but in a kind way.

For my school, he wrote a magnificent Jing, Qi, Shen (Essence, Energy, Spirit) Calligraphy. The transformation of Jing into Qi, and Qi into Shen, is the essence of martial arts. Every school should have one of these calligraphies hanging in a central place. This is to remind the students that what we are gathered for is not learning to hurt others but to become better, stronger, and wiser people.

Liang Ke Quan could carry a tune. For a man with very few teeth left, he could belt out a rousing song, and loved to sing. Especially when he had an audience!  A favorite was the Yueh Fei Anthem. (Yueh Fei was the founder of Xing Yi and a national hero).

Liang Ke Quan woke up very early every morning without fail, and practiced his Xing Yi and Ba Gua. His movements were very very soft.  Looking at them you would think they were nothing at all. How could  that be powerful? It’s not really a martial art is it? His movements were softer than almost anyones Tai Ji Quan. Then he would hit trees and they would tremble in Fear! When he reached out, you moved back, and it was irresistible.

Liang Ke Quan was a scholar warrior of the old school who truly embodied the Tao.