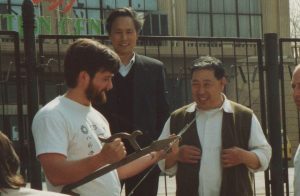 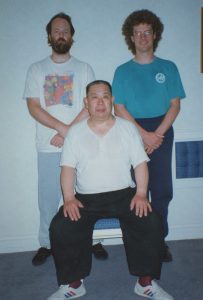 Zhang Hua Sen was one of the most amazing martial artists I have met. Equal to Wong Jackman, and Liu Wan Fu, in his athleticism. In his 70s, when I studied with him, he still had his flexibility, and legs, even though he was chubby. He could easily, and lightly touch his forehead with either toe. Or kick across his body to touch his other ear or kick over his shoulder. He could easily do huge diving rolls on a hardwood floor that were completely silent and then roll all over the place in a full lotus or other silliness.

Zhang Hua Sen had this amazing sense of humor and could make jokes with his gestures and facial expressions as well as long, intricate stories with a trick ending. Zhang was precise and demanding. His explanations were clear and hands on. Zhang expected your all out best effort and humble attitude. He did not tolerate fools at all. However, he was patient with hard working beginners. Zhang Hua Sen also relived the pressure with jokes, smiles, and encouragement because he knew some things were either difficult, or impossible for almost everyone! Really everyone just loved him and his lessons. His personality was very infectious.

Zhang Hua Sen grew up under conditions of hardship it is hard for us to even imagine. Zhang’s family was poor during a period hardship, and war, in China. There was no work, or jobs. Social services did not exist. Without money you starved. Food was scare, even if you had money. His father took work in Japan as a laborer to avoid starvation. At this time, being a Chinese laborer, working in Japan, was the lowest of the low, and a rough life. So then, Zhang’s mother was abandoned on the streets of Beijing with two small boys. His mother was then forced to sell his younger brother for a large bag of rice. When the rice was exhausted, she managed to find work in a wealthy household cleaning. But, she was forbidden to bring Zhang. Zhang’s mother abandoned him on the streets, or she would have starved to death too.

Zhang, still a child, was homeless, and alone on the streets of Beijing. And hungry.

An old woman took pity on him, and took him to a Beijing Opera company. Normally, when a child joined the Opera company the parents signed a waiver that said, if the child died during training, the company would not be held liable. Tough life for the kid was ahead. But, when he didn’t make mistakes during practice, he got feed. If he made mistakes he was punished, and missed the next meal. To say the training was severe is simply not enough. Zhang endured torturous foundation training, and developed magnificent skills, rising to fame in the World Of Beijing Opera.

Zhang Hua Sen became one of Beijing Opera’s greatest performers. Zhang Hua Sen starred in the most difficult role of all: The Monkey King. The Monkey King Role must be were Zhang’s playful sense of humor came from. Without a doubt, it is also where his mad rolling, leaping, and kicking skills came from. As the Monkey King Zhang would perform ridiculously hard stunts and fights scenes, flawlessly, in regular performances.

One of the best Opera fight scenes occurs in Heaven. After the Monkey King has eaten the Queen of Heaven’s Peaches of Immortality, and Drunken Lao Tzu’s Elixir of Invulnerability, he turned into a real problem! Before, he was already full of magical skills, and tricks, and carried an amazing magic staff. Then, he became immortal, and invulnerable! Plus, the Monkey King was really mad at everybody in heaven for a perceived insult. A huge fight breaks out between the entire Host of Heaven, and the Monkey King. The Monkey King is surrounded on all sides by the armies of Heaven. The entire Opera troop is on stage at once, dressed as the armies, and princes, of Heaven. They all throw spears at the Monkey King, played by Zhang Hua Sen. Zhang would nimbly kick the spears over his head into the arms of the warriors on the other side. Who would immediately throw them back, creating a nearly continuous barrage of spears, with Zhang kicking madly in the center.

So you could say, Zhang had some skills!

In 1974, the first two cultural delegations to leave China visitedt the West. China was totally Communist, and barely emerging from the Cultural Revolution. One team was the first Modern Wushu team to visit the West and featured Jet Li, as a child performer. He was awesome, and inspiring. Completely unlike anything kids in America did. I saw their performance live in San Francisco, when I was 12, with my father.

The second delegation traveled widely, but never visited the United States. Zhang Hua Sen was its star performer and played his best role, the Monkey King. He got as close Canada looking across Niagara Falls into the USA. Zhang said, at all times, he had two huge burly guards right next to him, so he could not flee, and defect to the west. Even when he went to the toilet! His family was also under close guard at home while he toured.

I trained with Zhang Hua Sen in Beijing on three different research trips, and he visited my school in Berkeley, Ca. He gave me a lot but, there was so much more there I never had the chance to learn. He was generous with his stories and inspirations that came from a different era, and ethos. Truly, one the greatest martial artists I have seen. Yet, you would never suspect the shocking skill, and athleticism that lay hidden under his plump, jiggly belly, and huge, happy face. I sure do miss him.