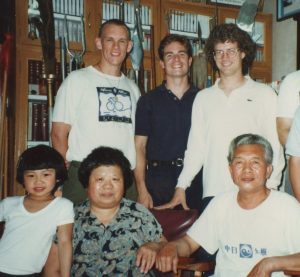 Zhang Kai – San Huang Pao Chui – Three Kingdoms Cannon Fist
I first studied San Huang Pao Chui with Zhang Kai in 1994, and then, continued to returned to learn from him in the 1990s. Cannon Fist, particularly, Three Kingdoms Cannon Fist is a rare style in the West. It is actually pretty rare, even in China, these days. However, only 100 years ago the San Huang Pao Chui Boxers were among the top escort service and bodyguard companies in Beijing. The head of their Bureau “Small Pig Tail Yu” was considered one of the most fearsome fighters in Beijing, and in China.
San Huang Pao Chui, or Three Kingdoms Cannon Fist, is an ancient style of Kung Fu that originated in the Shaolin Temple. Pao Chui, or Cannon Fist, boxing is considered a precursor, or mother style, to our beloved Northern Shaolin. This is one of the reasons I was excited to study from Zhang Kai. The other reason was because many of the Ba Gua Zhang Styles in the Beijing, and Tianjin, areas use Pao Chui Boxing as a foundation for their Ba Gua Zhang students. Especially, if those new Ba Gua Zhang students are kids. Because I enjoy a keen curiosity regarding the actual methods of Ba Gua Zhang, I was also excited to learn some of this “Hard/Soft” style with the explosive Cannon Fist power.
Pao Chui uses explosive force generated from the center of the body. The cannon Fist explosive force travels outward to all four limbs at once. Pao Chui is explosive, just like a cannon firing. Pao Chui boxers use a loose, flexible spine, and hips to generate enormous sudden explosive force.
Zhang Kai is the Grandmaster of the Three Kingdoms Style of Cannon Fist. Zhang Kai is a walking encyclopedia of traditional Kung Fu. Zhang Kai specializes in weapons, and has inherited a vast collection of ancient weapons routines. I would be surprised if he weren’t one a only handful of people alive to know how to use certain “lost” weapons.
Zhang Kai’s specialty, without a doubt, is the long spear. Zhang Kai is not a large person, yet, he is able to wield a 20 foot spear with a two kilo head. Honestly, to hold the spear by the end, and simply lift the tip off the floor takes real Kung Fu. To perform an entire routine with it is just amazing. i wish I had pictures of him wielding his spear.
Perhaps, one day I will have chance to share some fascinating stories about this amazing man!