Home » Our Blog » History of the Shaolin Temple

In China there is an ancient temple known as the Shaolin Temple. The name means Young or Small Forest and apparently when it was built almost 1200 years ago it was surrounded by a forest and on the side of the smaller peak of the Song Mountain. The Shaolin Temple is a Buddhist monastery. Buddhism has a long history in China, but it originally began in India. At first, the temple concentrated on translating texts from the Indian language of Sanskrit into Chinese.

Later a monk from India came to China. His  name was Bodhidharma, but the Chinese called him 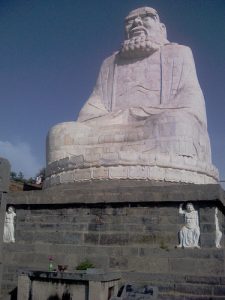 Tamo. He was a very exceptional person who had trained in Buddhism for many years and was very wise. Buddhist practice has many different types, but all hope to achieve Enlightenment a spiritual state of great insight and ability that was attained by the original Buddha. When Tamo arrived in China he had quite a few adventures, but couldn’t find any worthy students.  So, he went to the valley where the Shaolin monastery was. Then he went up into a cave and began waiting and meditating.

Tamo meditated by staring at the wall of the cave. He sat there for 9 years without moving and people gathered from all over to look in and hope that one day he would come out and teach them. His spiritual presence must have been quite extraordinary.

Staring at a Wall is Hard Work! 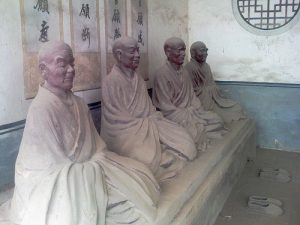 When he emerged from the cave there were many people gathered. Tamo felt some of them were worthy of teaching so he began. What he taught them was to calm and clear their minds and stare at a wall. This is much harder work than most people would imagine, especially since they did it all day long. Most of the monks fell asleep and did not have the mental stamina and powers of concentration necessary. They were also too weak physically to sit that long. Therefore, he taught them a series of exercises known as the Yi Jin Jing, or Muscle Tendon Changing Classic, to strengthen them for meditation practice. These exercises were very effective and soon the monks had much more success with the other exercises and meditations that Tamo taught them.

The meditation method is now known as Chan in Chinese or Zen in Japanese. It builds enormous mental calmness and concentration. Chan or Zen is today very popular in many countries and there are countless people who practice it to improve themselves.

The Muscle Tendon Changing Classic also exists today. After 1200 years there is more than one 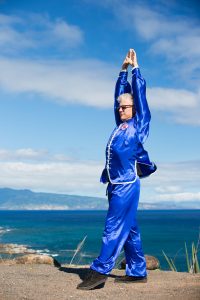 variation of these famous exercises. However, they are all very healthy to practice and combine elements from Indian Yoga with Chinese Qigong.

The monks at the temple had a need to protect themselves from bandits and trouble makers. From the earliest days there were undoubtedly some martial arts practiced at the temple. For the Buddhist monks who are pacifists and vegetarians the thought of killing is unpleasant and against their vows. However, there is a long tradition of people staying at monasteries for short periods to rest and study and for people like politicians or military figures to retire there. These guests paid for their stays and this would help to fund the temples all over Asia. Certainly some were expert martial artists.

In any case the monks combined the Chan or Zen meditation with the Muscle Tendon Changing Qigong and the martial arts that currently existed and created something entirely new: Shaolin Kung Fu.

The history of the Shaolin Temple spans a truly long time for human beings, 1200 years.  During that time a lot must have happened. Unfortunately, few records exist today. So much of you might read is closer to legend or myth than historical fact. However myths and legends are often more powerful for motivating and guiding people than facts. 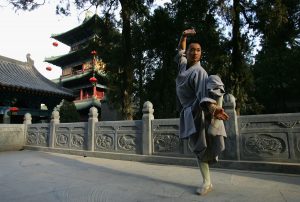 The Shaolin Temple does still exist today. The 20th century was very difficult for the Shaolin Temple. It was burnt to the ground in the 1920s and the monks dispersed. However, a few bravely rebuilt at least part of the temple. However, they were again killed or severely persecuted by Chairman Mao and the Communist Regime during the Cultural Revolution. By the 1980’s there were only a handful of battered monks left who have tried to keep it going. Today the Shaolin Temple is booming but it is more a tourist business and commercially oriented martial arts school and less a real monastery. However, times change and the temple will probably return to being more of a spiritual powerhouse as conditions in China change.

I teach classes in Northern Shaolin Kung Fu in San Rafael, San Anselmo and in Berkeley CA. I hope you will able to join me.